As Senior Technical Advisor and member of our board of directors, Dr. Benjamin Andriamihaja is universally regarded as an essential part of the PIVOT community. Since before the organization even had its name, his cultural, political, environmental, and operational perspectives were a driving force in the formulation of our strategy to deliver care to the most vulnerable populations of Madagascar.

When our founders were exploring the possibility of establishing a health care NGO in Madagascar, it was thanks to an existing relationship with conservation research station Centre ValBio (CVB) that paved the way for PIVOT to establish trust with local officials in Ifanadiana District. CVB’s founder and leader, famed primatologist and now PIVOT board member Dr. Patricia Wright, had been there for decades to preserve the region’s rainforest and study its wildlife, having established Ranomafana National Park (RNP) as a UNESCO World Heritage Site in 1991.

At her side throughout that process was Dr. Benjamin Andriamihaja, who participated in establishing the park’s perimeter in the early 90s, and served as the first coordinating director of what has since become an internationally-renowned destination. Between his intimate knowledge of the park and its surrounding communities, his doctorate in biochemistry (in which he studied Malagasy soils at Kent University), and his experience working with multiple governmental bodies in Madagascar, it suffices to say that the depth of Dr. Benjamin’s local knowledge quickly proved to be extremely valuable to our vision of transforming health care in the district. 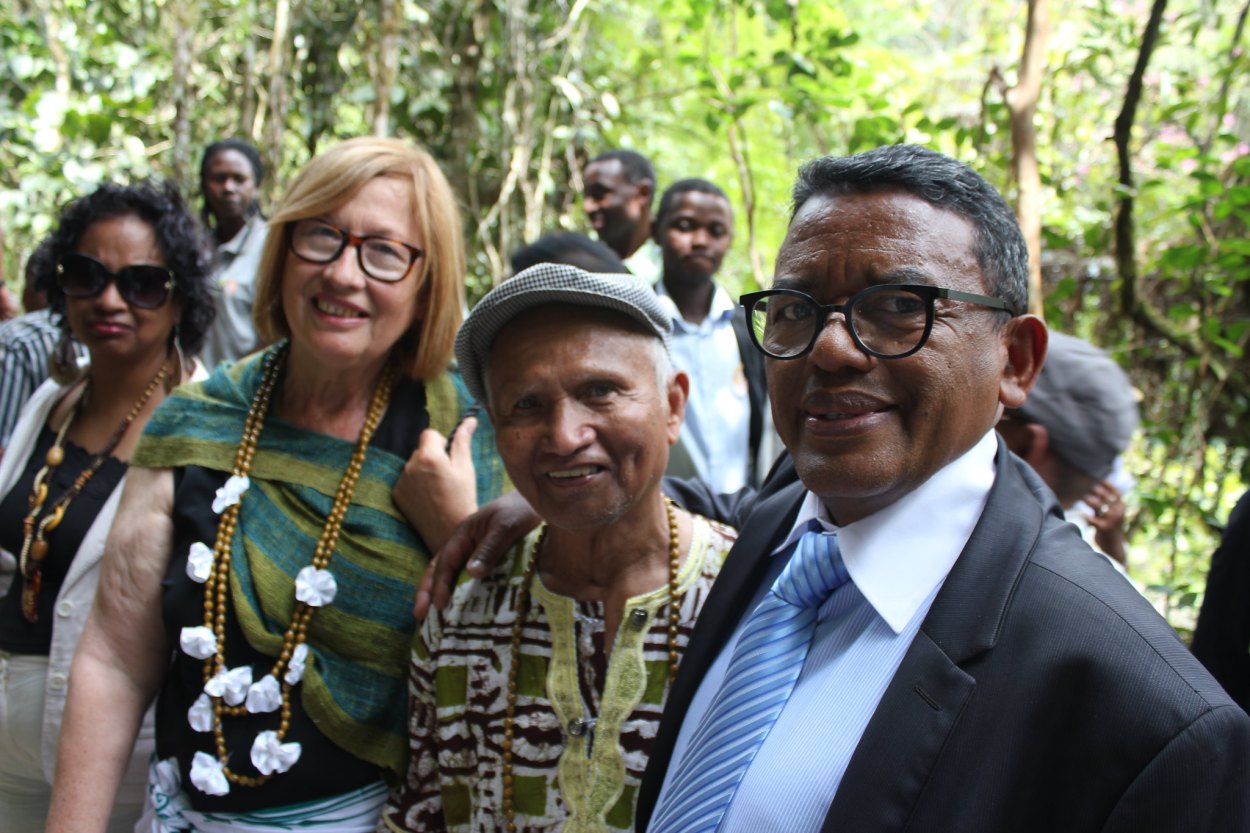 From his own perspective, PIVOT offered Benjamin opportunity to fulfill a long-standing desire to do good for both people as well as the planet. “I wanted to work in the humanitarian field ever since I was little,” he explains, “and when I was working on my PhD, I was in contact with remote Malagasy communities for years. That’s where I saw the poverty and the disease that were causing so much suffering.”

Dr. Benjamin Andriamihaja(standing fourth from right in back), with some of the PIVOT co-founders, early staff, and board members in Madagascar, 2014.

When speaking of PIVOT founders Jim and Robin Herrnstein, Michael Rich, and Matt Bonds, he recalls thinking they were “young, dynamic, and remarkably sensitive to the needs of the people here.” Joining forces with them to launch this new health initiative was a chance to contribute to a mission he believed in. He thus became one of the first members of PIVOT’s board of directors.

After almost six years working side by side, Executive Director Tara Loyd says that no trip to Madagascar is complete without time spent with Benjamin. His combination of expertise and compassion are evidenced by how he “has his finger on the pulse of everything – from the status of our high-level partnerships, to how our hospital cleaners are feeling about their jobs, to how a remote community is feeling about our pace of renovation to their health center.”

She adds, “I never talk about PIVOT’s success without crediting Benjamin, to whom I look to for guidance at every move.”

Benjamin has played a key role in establishing and continually strengthening our relationship with government authorities in Madagascar, without which PIVOT would never have come into existence. Now based in the nation’s capital city Antananarivo – not to mention making a 22-hour round trip drive to Ranomafana monthly – Benjamin plays a crucial role in supporting our collaboration with the Ministry of Health at the central level, ensuring PIVOT’s visibility and participation in important national conversations about health care policies and implementation.

Outside of PIVOT, Benjamin is director of the Institute for the Conservation of Tropical Environments (ICTE). This positions him at the nexus of a key piece of PIVOT’s identity: the relationship between human and environmental health. As we look ahead at plans to expand to a second district, we consider his voice crucial in determining which populations’ dependence on the surrounding ecosystem may make them – and the environment – more vulnerable. 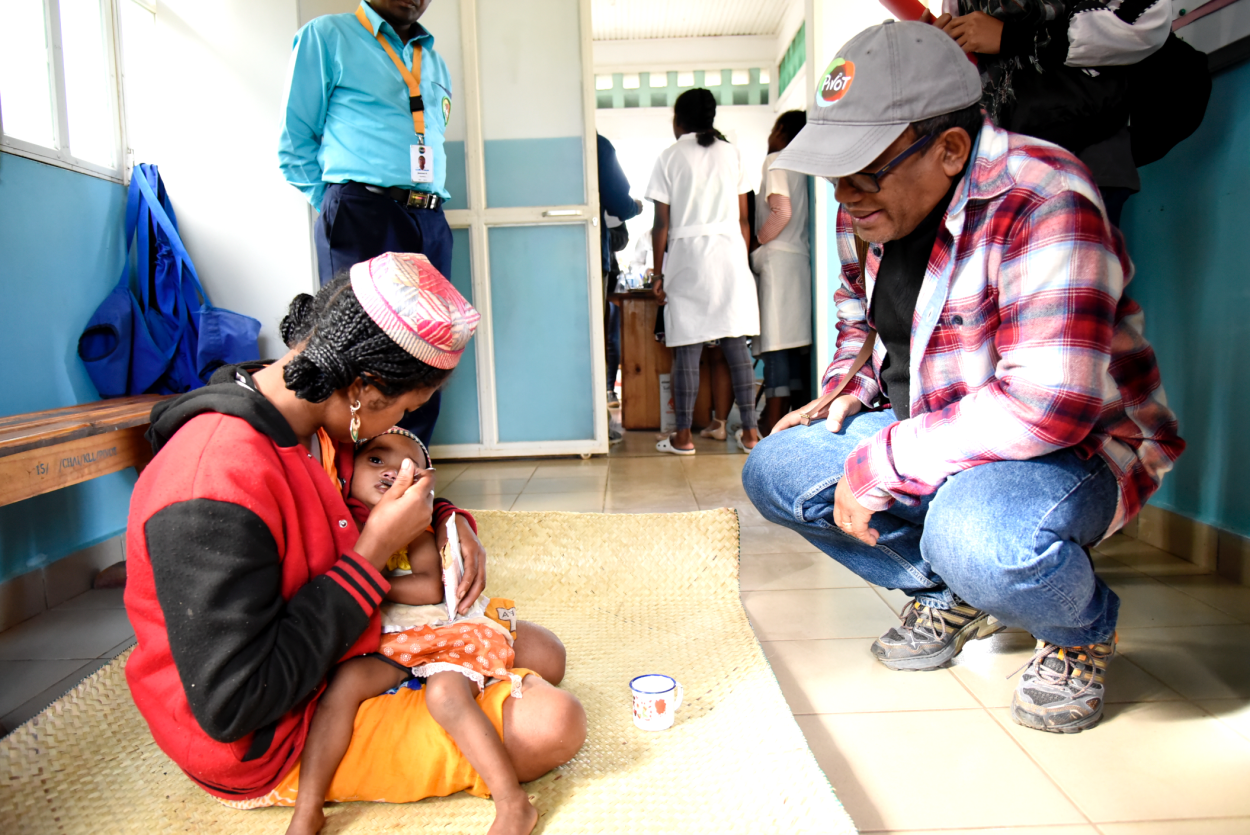 Dr. Benjamin Andriamihaja speaks with patients about their experience at PIVOT-supported Kelilalina Health Center during a malnutrition consultation.

The personal mantra Benjamin has maintained over his forty-year career is that “success comes only after hard work.” Happily, he says that he is constantly surprised and inspired by the hard work and dedication of PIVOT’s young staff, and how their evident depth of commitment to the organization’s approach and philosophy of health as a human right. He says, “we achieved extraordinary results in our first five years of work, so why not have similarly extraordinary results in the next five?”

We are encouraged and honored by Dr. Benjamin’s outlook, and look forward to having his guidance as we continue onward to achieve Health For All.